Before we start talking ‘fat tyre bicycles’, we need to know about the beginnings of mountain biking in general. This opened up a whole new avenue to explore the wide open outdoors. In the early 1970s and early to mid 1980s, certain riders in California and Colorado started modifying their bicycles with wider ranges of gears, powerful cantilever brakes and durable light components. Mass production and easy availability enabled mountain bikes to outsell road racing and touring bikes by the time the 1990s arrived.

End of the pavement/road was no longer the end of the trip. Riders scouted new roads, backcountry trails, finding out all the while that wider/fatter tyres and an upright seating position are very comfortable for commuting/touring. But rocky terrain, soft surfaces and steep gradients still posed a significant challenge. Subsequent advances in suspension, materials and geometry did occur. Most of these advances however focused on speed. This is where fat tyre bicycles come in to the picture. They help tackle the challenge of riding on diverse types of surfaces like sand, mud and snow.

No other event contributed to fat tyre bicycle’s development as much as the ‘Iditabike’. Iditabike is an event under the ‘Iditarod invitational’, a challenge of epic proportions. The first Iditarod challenged participants to cover 200 miles of rugged Alaskan wilderness in the dead of winter. Cyclists are to follow trails left by snowmobiles and dog sleds. These trails are a mixture of snow, ice and water overflow. Walking alongside the bicycle in snow made a wider tyre footprint essential.

Initially, riders welded two or in some cases even three rims to increase tyre footprint and hence the grip, resulting in more riding than walking. In the meanwhile, major developments were made in the state of New Mexico while riding sand dune and arroyos. Rims and tyres developed here made their way to Alaska and revolutionized snow/ice riding.

One of the game changers in the fat tyre bicycle scene was the ‘Surley Pugsley’ with substantially larger rims and bottom brackets. This was in 2005. now almost a decade later, we have fat tyre bicycles that have carbon frames and are rack friendly.

Sturdy bikes is a manufacturer based in Ahmedabad, Gujarat that has a wide range of fat tyre cycles. The bicycle we are looking at here is the fold able version. With a blue frame made of carbon steel, this bicycle is priced approximately at Rs. 16,000/- making this an attractive option for people looking for a fat tyre bicycle under Rs. 20,000/-. 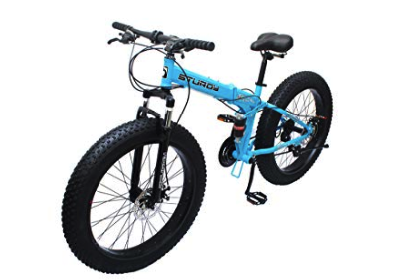 CHECK PRICE
Let us take a look at the pros and cons of this bicycle:

Frog cycles is a part of Alpha Vector India Private Limited and is based in Ahmedabad, Gujarat. Here we take a look at just one of their many products namely the Spartan 25” 3.0. Available in three frame color combinations namely blue-yellow, black-green and silver-red, this fat tyre cycle is priced at approximately at Rs. 14,000/-. at this price and specifications, this is one of the best fat tyre cycles under Rs. 20,000/-.

Based in New Delhi, one of Fit Trip’s statements is ‘FitTrip’s humble journey reflects the toil of a bunch of engineers and product designers, all focused on one goal – to produce the toughest fat bike this country has seen’. And produce they did. The Marine 2.0 is one of the best fat tyre cycles in India if not the best. Priced at around Rs. 25,000/-, this might seem somewhat expensive compared to other fat tyre cycles in this list, but the truth is that you get what you paid for as you will see in the specifications when compared to others in this list. 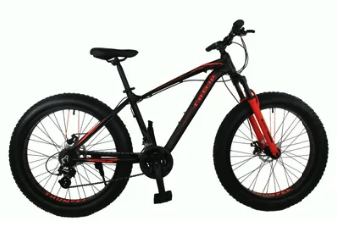 Let us take a look at a few of the pros and cons of this bicycle:

Unirox is a manufacturer based in Kolkata, West Bengal and claim that their products are ‘Designed and developed in Germany’. They have quite a few offerings in the fat tyre cycle category. Ex-Pedition is one of them. These fat tyre cycles come in two colorways namely black with red and silver accents and black with blue and fluorescent green accents. Priced at around Rs. 25,000/-, this might be an expensive proposition for some.

Let us take a look at the pros and cons of this bicycle:

As the name suggests, this is a fat tyre cycle by Stryder, a brand under TATA International that manufactures premium bicycles. The Contino Big Rock is just one of their many offerings. With a big and fat head tube, this fat tyre cycle definitely looks different. Priced at Rs. 25,000/-, this is an exciting offering by one of India’s largest corporate houses. This fat tyre cycle might feel expensive to a few potential buyers, but TATA seems to have provided the quality and components to back the price. As this fat tyre cycle has no suspension whatsoever, it’s off road potential seems limited. The bicycle comes in two colorways namely matte black fluoro orange and matte black fluoro green. 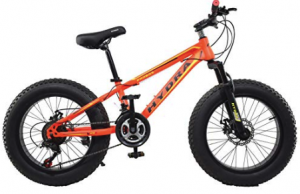 Let us look at a few pros and cons of this bicycle:

Unirox is a manufacturer based in Kolkata, West Bengal and claim that their products are ‘Designed and developed in Germany’. They have quite a few offerings in the fat tyre cycle category. Big John is their offerings for kids. Priced at around Rs. 16,000/-, this fat tyre cycle for kids is available in two colorways namely black green and black orange. 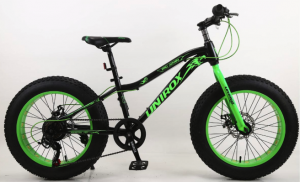 Let us know about the pros and cons of this bicycle: 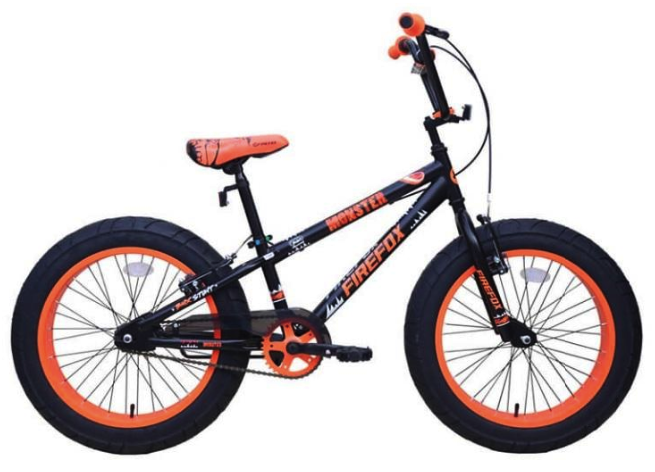 Let us take a look at this bicycle’s pros and cons:

Coming from the likes of TI cycles, one of India’s oldest bicycle manufacturers based in Chennai is this fat tyre cycle for very young kids. Made from 6061 aluminium alloy frame priced at around Rs. 9,000/-, this bicycle is ideal for a very young child. Colors available are glossy red, black and white. 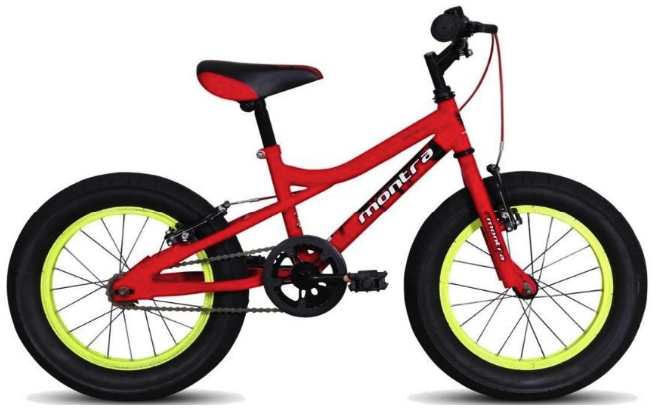 A Few Noteworthy Points About The Fat Tyre Cycle

A fat tyre cycle is a very versatile bicycle. Whether you are a beginner or a veteran cyclist, fat tyre cycles are bound to be a whole lot of fun for everyone. Most new riders are discouraged from the very activity of cycling because of the effort they might have to put in to pedaling the bicycle. A fat tyre cycle cuts right to the chase and tries to address this problem upfront. While fat tyre cycles are an amazing way to traverse sandy, muddy, marshy or snowy terrain, they are an exceptional way to introduce someone to cycling as an activity. Hope you readers find the information provided above useful and settle on a fat tyre cycle to purchase. Bring on the smiles and kill the miles.

360Ride.in is a participant in the Amazon Services LLC Associates Program, an affiliate advertising program designed to provide a means for sites to earn advertising fees by advertising and linking Products to Amazon.in. Additionally, 360Ride.com might participate in various other affiliate programs, and we sometimes get a commission through purchases made through our links But Our Reviews are unbiased.